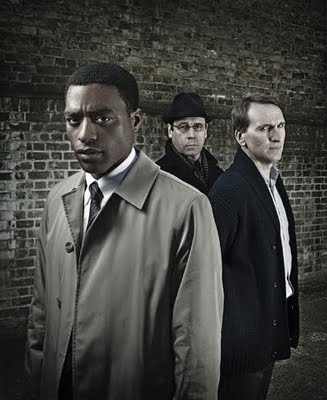 "The shadow line. That's where we walk."
—Khokar, Episode 5
Advertisement:

Drug baron Harvey Wratten is dead, and nobody knows who did it. From the cop with a bullet in his brain, whose amnesia leaves him doubtful of his own moral compass; to the drug-lord driven by a profound personal tragedy, risking it all on one last deal; to the brilliantly lethal puppet-master who gradually emerges from the shadows to bring the story to its shocking climax, the show explores the morality of these characters as they negotiate the repercussions of Wratten's death and attempt to navigate the fine line between right and wrong.

It has been compared, inevitably, to The Wire, being another Grey-and-Gray Morality, Four Lines, All Waiting, cops 'n' robbers drama — however, stylistically the two shows couldn't be more different. In contrast to The Wire's verisimilitude, The Shadow Line is stylised and Noir-ish, with heavy symbolism and crafted dialogue.

Broadcasting started on 5 May 2011, ended on June 16th, and the DVD is out in the UK July 14th. Not to be confused the OTHER Shadow Line.