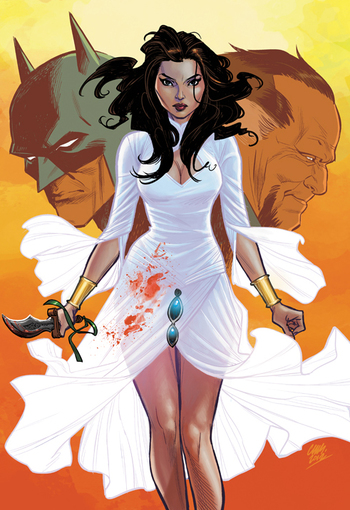 Talia Al Ghul (arabic:Vanguard of the Demon) is a DC Comics character commonly associated with Batman as both a villain and Love Interest. She was created by writer Dennis O'Neil and artist Bob Brown and Dick Giordano. She made her debut in Detective Comics #411 released on May 1971.

Talia is the daughter of Ra's Al-Ghul and was raised from birth to be part of his criminal empire, in both administration and combat. She grew up to be a shrewd leader and excelled in managing his criminal and legitimate operations and became his most skilled, loyal and trusted advisor which led to her being appointed as his primary heir, although her status as a woman still made her an unsuitable heir in his eyes and his ultimate goal for her is to find a suitable mate to give him true male-born heir, with the most famous candidate being Batman. While Batman is uninterested in Ra's plans, he has often demonstrated actual romantic feelings for Talia.

Talia is known for being one of Catwoman's primary competitors for Batman's Love Interest and oft-regarded as his second great love. And like Catwoman, being on opposite sides keeps them apart. Talia is often conflicted by her loyalty to her father and her love for Batman. She will often pick one over the other, only to change her mind again later. Ra's whole-heartedly approves of the relationship between Batman and Talia, but only insofar as it will produce him an heir should Batman himself comply. He finally got his wish when Batman and Talia had a one-night-stand (or she raped him, Depending on the Writer) and she gave birth to Damian Wayne. However, Damian later defected and Talia had him cloned. Then the clone later kills Damian, who later gets better. In other realities, Bruce and Talia's son is Ibn al Xu'ffasch, and he does take over for Ra's; in a mild twist, Ibn is a benevolent leader.

Talia is most commonly depicted in an Anti-Villain light or as an A Lighter Shade of Grey to her father, but Depending on the Writer she has also been depicted as a cruel and ruthless villain with little redeeming qualities. She's normally not above co-operating with Batman or other heroes if it would serve her own ends, and has firmer ties to the rest of The DCU villain community than her father, such as taking over for Lex Luthor as CEO of LexCorp upon his election as president or being one of the core members of the Secret Society of Super Villains.

Talia Al Ghul has appeared in other works: