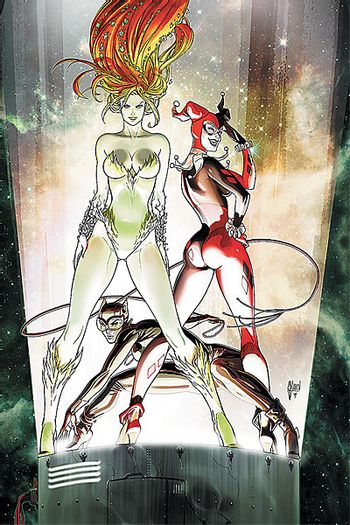 I was gonna add some sort of witty text here, but... well, look at that.
Advertisement:

Gotham City Sirens was a monthly comic-book series published by DC Comics co-starring Catwoman, Poison Ivy and Harley Quinn, three characters who had previously recurred throughout the DC universe, primarily as foes / allies / love-interests of Batman. Their portrayals have varied widely over the years, ranging from terrorists to just shy of The Hero, and their current portrayal is right on the Anti-Villain / Anti-Hero line. None of them have completely foresworn their extra-legal activities, but neither have they become a trio of Villain Protagonists, either. The series lasted 26 issues (August, 2009-September, 2011).

Though not quite a Slice of Life (the series remains an Action/Adventure story about costumed stars battling other costumed individuals) the premise is that the characters have not united for any form of Evil Scheme or plot, but rather have decided to be a team simply for the sake of being with people they are on friendly terms with. Previous events in other comics that are alluded to in the very beginning mean that the characters have no shortage of money, so they have no immediate impetus to commit crimes, and the first arc of the series revolves around when they themselves are attacked by other criminals, instigated when Harley is out shopping.

Though easily understandable to the newcomer, the first issues of the series refer heavily to recent events in the history of the Bat-Family of comics, notably the Hush storylines and the Death Of Batman and Battle For The Cowl arcs. These events set up the premise for Gotham City Sirens, explaining the supposedly-legal funds the characters have, their motivations when interacting with each other, and the rationale for their cooperation.

The series is light-hearted while remembering that it is also supposed to be dramatic, and does not forget who its three characters are and what they can do. They might be new roommates dealing with personality conflicts, but they are also experienced and competent supervillains, and since none of them have secret identities, they frequently bring that part of their lives into their "normal" lives, such as when they hire a member of villainous team specializing in heavy equipment to help repair their apartment. They will then go off to dramatically rescue their kidnapped teammate who is being held hostage by a psychotic villain with a clown motif... no, not that clown-themed villain, but it will take a few issues for you to realize it. So far it has managed to be both intense and funny, and even though it might not have completely revolutionized the entire world of comics in its first ten issues, it has introduced well-written (and beautifully drawn) stories about intriguing characters in amusing situations.

And yes, since you are all thinking it, there is enough Fanservice, Most Common Superpower, and Distracted by the Sexy to go around. It is a series starring three of the hottest women in the DCU, so what did you expect?

Written by Paul Dini, writer for many series in the DC Animated Universe and creator of Harley Quinn.

The series, like every other in The DCU, was cancelled with the end of Flashpoint, with the three regulars going their separate ways. Catwoman will debut in a new solo book, Poison Ivy will join the Birds of Prey, and Harley Quinn will become a member of the new Suicide Squad.

For what pretty much amounts to their heroic counterpart, see Birds of Prey.