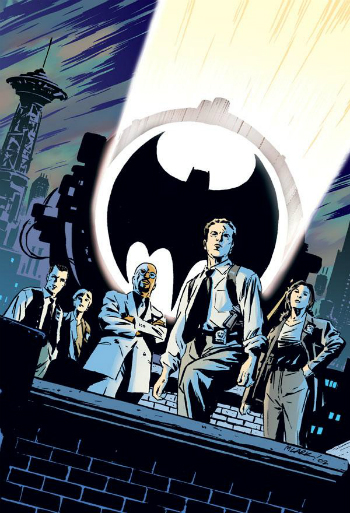 Homicide: Life on the Street meets Batman. This was a comic book series which lasted for 40 issues (February, 2003-April, 2006). It was written by Ed Brubaker and Greg Rucka (both collaborating and each alone), and illustrated by a variety of artists, such as Michael Lark, Brian Hurtt, Stefano Gaudiano, Greg Scott, Jason Alexander, Jose Lopez and Steve Lieber.

The officers of the Gotham City Police Department have to deal with all sorts of threats, from accidentally stumbling across Mr. Freeze while looking for a missing girl to finding out why Firebug killed someone. There are normal cases, too, kidnappings and murders, but they are interspersed with the flotsam and jetsam created by Batman and his rogues gallery. The series is a Spiritual Successor of sorts to Batman: Gordon of Gotham, which also features Gotham cops working cases without Batman.

This comic is divided into the day and night shifts of the Major Crimes Unit, the department of the GCPD tasked with dealing with "freaks" (supervillains) and the more important mundane crimes. Regular characters included Marcus Driver, Romy Chandler, Renee Montoya, Crispus Allen, Maggie Sawyer, and Josephine "Josie Mac" MacDonald.

The series was first collected into five trade paperback volumes which collected almost (but not all) issues. Some volumes also contain stories not published within Gotham Central, but from other DCU series that feature common characters:

Four hardcover collections have also been published. These editions collect all published issues of Gotham Central, including the issues absent from the trade volumes, but lack the connected stories from independent comics. The series was then republished in glossy-paper trade format, in a form identical to the hardcover.