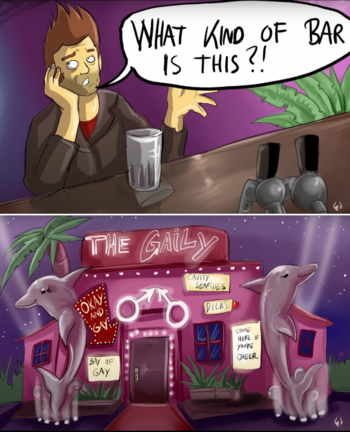 "A very, very gay bar!"
Scott: Dude, everyone in here's a dude! I think we're at a gay club!
Stiles: [surrounded by drag queens] Man, nothing gets past those keen werewolf senses, huh, Scott?
— Teen Wolf, "Frenemy"
Advertisement:

Manfred M. Manly wanders the streets looking for a burly bar where he can order his favourite Gargle Blaster, proposition women with crude sexual Double Entendres and watch manly high impact sports on a 30 year old television before establishing alpha male dominance by engaging in Greco-Roman wrestling with other patrons.

He finds himself a bar or club with broad strapping patrons, perhaps full of bikers or steel workers, deep bass music and tall erect steel bars for extra manly effect.

But wait, what's that? A series of short sudden close ups on each of the elements of the bar have revealed the truth. Those manly steel bars are for pole dancing, there are no women in sight, the bass music is Techno, the bikers and steel workers seem to love their leather, and that ain't no Greco-Roman wrestling they're engaging in...

Manfred M. Manly has just had the Gay Bar Reveal. He has walked into a bar or club ignorant of its nature and slowly realises that it's a gay bar. It normally only happens to the character most likely to freak out about it, sometimes they'll actually be accompanied by someone who does get it quicker than them or even lead them there who provides a foil for the few moments before they catch on. Sometimes Manfred will have the conspicuous homosexual elements pointed out to him but automatically imagines it to all be part of manly bonding.

The bar itself can vary in terms of its queerness. At one end of the scale it can be completely inconspicuous until someone points out that there are only male patrons and a few of them are holding hands. The bar can often at the point of the reveal suddenly become a lot more obvious, with visual cues only actually appearing when the director wants us to see them. On the other hand, the trope can be frequently parodied by so obviously being Where Everybody Knows Your Flame that it makes the surprised patron look stupid.