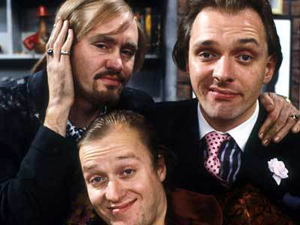 Filthy Rich & Catflap is a Brit Com, originally transmitted on BBC2 in early 1987. Historically regarded as the spiritual successor to The Young Ones, with much overlap between the two series in terms of main cast, writing staff, and humour.

Like its spiritual predecessor, the show has absolutely No Fourth Wall. Compared to The Young Ones, however, the plots are tighter, and the satire is sharper. At its core, the series is a vicious deconstruction of postwar light entertainment, and serves as a thesis on its irrelevance in Thatcher's Britain. Accordingly, it featured several cameos from the UK's alternative comedy scene, like Stephen Fry, Hugh Laurie, and Mel Smith.

It ended after six episodes when Mayall complained to co-writer Ben Elton about his writing privileges. Elton didn't listen and Mayall left.