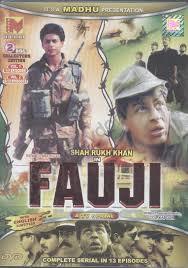 Fauji was a single season 13 episode Hindi language TV show broadcast on the government run Doordarshan network in India in the year 1989. The show was the first ever one that Shahrukh Khan got a starring role in. Like most prime time Indian TV shows of that era, Fauji was split into half hour episodes. All episodes can be viewed on YouTube.

The show was about a group of newly minted second lieutenants going through training to qualify as Para-commando (Special Forces) squad leaders. The show follows a class as they learn the tools of the trade, navigate tough instructors as well as relationships, and in the final 3 episodes, go on an actual commando raid mission. Khan stars as 2nd Lt Abhimanyu Rai, a previously happy go lucky playboy type, who joins the army just so his war hero elder brother Vikram gets off his back about being a YOLO player. Abhi signs up for Commando school, only to find out that Vikram is an instructor there. While going through training, Abhi falls for a young army doctor who has been posted there, while Vikram tries to start a relationship with a journalist. Other trainees have issues to navigate as well, be it the enlisted commando trying to get a money hungry canteen owner's blessing to marry his daughter, or the married (apparently) commando trainee who tries to hide this fact from his superiors.

At the end, the group are assigned to lead a commando raid on an enemy forward base. Will they succeed? Who will return and who won't make it back?

Tropes encountered in this show are: