Western Animation / Happy Ness: The Secret of the Loch 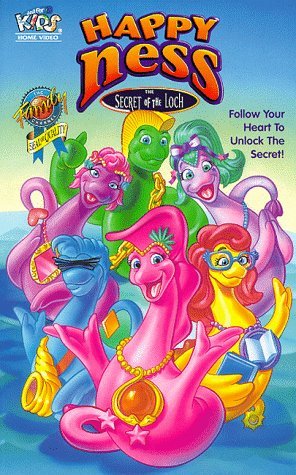 Happy Ness is waiting there for you.
Advertisement:

Happy Ness: The Secret of the Loch is a children's cartoon that aired in 1994-1995. It was produced by Abrams Gentile Entertainment, and C&Dnote of The Bots Master fame.

A timeless tale of hope, wonder, and dreams-come-true, brings to life the fascinating world of the legendary Loch Ness Monster, showcasing them in a rainbow-colored world of music and song.

When the McJoy children, Halsey, Hayden and Hanna stumble upon a secret subterranean paradise, they are taken by Sir Angus Prize into the land of the Nessies. Together with Happy Ness, Queen of Happy Land, and a bevy of delightful sea creatures, they embark on a series of amazing adventures. Along the way, you can be sure they'll be on the lookout for Pompous Ness, Queen of Gloom Lagoon, and her court of naughty Nessies who are always ready to spoil the fun. Part fable, part fantasy and all fun, Happy Ness: The Secret of the Loch adds up to an original musical, magical adventure for children of all ages.

Not to be confused with The Family-Ness which is another similar themed also British series which aired a decade earlier and used the same "-Ness suffix denotes personalities of a group of Loch Ness monsters" concept.

All you have to do is believe!

There's a world of Nessies, and they're all a part of you.