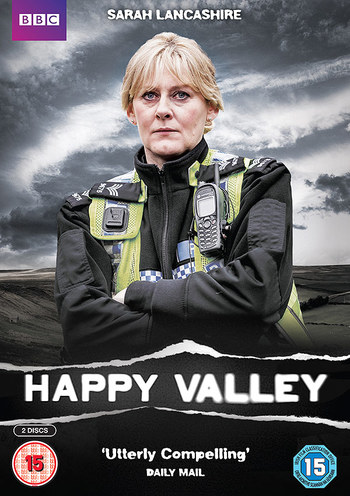 From the woman who brought you a female Buddy Cop Show in Manchester and two old people falling in love again, comes one very dark cop show (2014-present).

The first series focuses on Sergeant Catherine Cawood, a no-nonsense police officer in Hebden Bridge, Yorkshire (nicknamed "Happy Valley" by real life cops due to its high levels of drug related crime), who has just learnt that Tommy Lee Royce, the man responsible for her daughter's suicide (he raped her and she ended up having a child) is being released from prison after doing time for drugs offences. While she is dealing with that, an accountant hires a group of local crooks, including Tommy, to kidnap his millionaire boss' daughter, Ann Gallagher, so he can get the money to send his daughter to a public school. Unfortunately for all concerned, including Cawood, things spiral rapidly out of control.

The second series sees Catherine deal with a new threat, when a serial killer who mutilates and strangles vulnerable women starts killing in the area. Meanwhile, despite being behind bars hundreds of miles away in London, Tommy Lee Royce forms a sinister new relationship that could further threaten Catherine and her family. Additional focus is placed on new characters such as Detective Sergeant John Wadsworth, whose fractured personal life spirals out of control and embroils him in the very investigation he and his new superiors from the Halifax Major Incident Team, are conducting.

Hard to watch, but critically acclaimed, this not only picked up a Bafta for its first series but also several other prestigious awards.