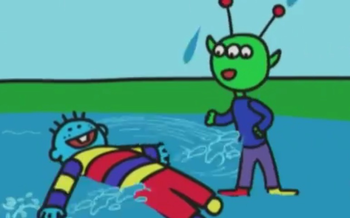 Though they look dry, they're actually wet.
Advertisement:

Whenever a cartoon character falls, jumps or is pushed into water, they get right back out without any visible signs of wetness. Often the character will be fully immersed underwater — and their clothes will remain pristine and flowing. They don't need to change their clothes, nor dry themselves with a towel, nor do they seem the least bit uncomfortable in what should be sopping wet clothing. In Real Life, clothing generally tends to be very heavy, cumbersome and uncomfortable when it's wet. Most times if they do show off these signs, they're most likely to be plot related.

The character's hair will usually also be completely, unrealistically dry. Many readers will be quite familiar with the fact that even the lightest rain can completely ruin a style and turn it into a frizzy mess. The fact is, drawing things when wet is incredibly labor-intensive,. So, to get around something most won't notice, the solution is to remove any direct signs of wetness. The context provides the viewer with enough cues to know that characters are wet, even if they don't look it. With furred characters or certain hairstyles, it's impossible to not indicate wetness through the fur or hair without breaking suspension of disbelief for the audience, but expect it to be short-lived.

Compare with Water Is Air.