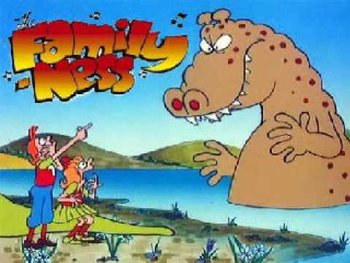 The Family-Ness (1984-1985) is a British children's cartoon revolving around the adventures of a brother and sister, Angus and Elspeth McToot, and their friends, a family of Loch Ness monsters collectively known as the Nessies.

The children become friends with the Nessies after they save the clumsy Silly-Ness from a hole. The mother of the Nessies, Her High-Ness, made it a strict rule beforehand that Loch Ness monsters have nothing to do with humans, but she makes Elspeth and Angus the exceptions after they save Silly-Ness. To show her gratitude for the children's actions, Her High-Ness gives them "thistle whistles" that they can use to call on the Nessies at any time.

Elspeth and Angus's dad, Mr. McToot, is the keeper of the Nessies' loch, but he dismisses anyone's claims of seeing a Loch Ness monster as nonsense. Similarily, the local policeman does not believe anyone who says they saw a Loch Ness monster. Professor Dumkopf, on the other hand, knows for sure that the Nessies are real and tries to prove their existence by making various inventions to use in and around the loch; his plans are usually foiled by the McToot children or the Nessies themselves, however.

Not to be confused with a wholly separate other British (albeit French co-production) series which also featured the same "-Ness suffix denotes personalities of a group of Loch Ness monsters" concept a decade later Happy Ness: The Secret of the Loch.