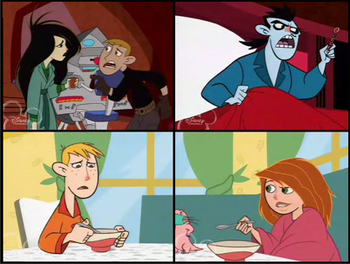 Four colds in one TV show? That's an academy record!
"I've got a cold in my nose."
— Betty Boop
Advertisement:

A character comes down with an illness, and may be bedridden. This may be in order to pad out the season, to provide an excuse as to why that character isn't present when their skills or powers would wrap up the plot neatly in a few minutes, or to give the love interest an excuse to nurse him or her back to health, often using bad-tasting medicine, a hot mug of whatever, and/or soup. In romances, the sickness is all about the worried, tender nursing. And in the comedies, they frequently end with the sick character now all healthy and looking forward to doing whatever... only for their friend to start showing symptoms, almost nearly out of the blue. The latter may invoke Caretaker Reversal if said friend was doing the nursing, but on the other hand, the "symptoms" might only be minor and lead to a Jumping-to-Conclusions Diagnosis, and if it's outright stated that the character isn't sick after all, that's a Shock-and-Switch Ending.

Cures for this illness can vary wildly by genre, and obtaining the cure may take up a small plot arc of its own. These illnesses are very rarely, if ever, fatal. The illness also mostly never has lasting implications for the main Story Arc, though it's not beyond the pale for a Monster of the Week to be responsible for a character illness or find a way to exploit the opportunity.

The Sick Episode may also entail characters having to work through their illness when they'd really rather be at home in bed with bowls of chicken soup. Or it may cover the remaining healthy characters scrambling to fill the hole left behind. In both of these cases hilarity sometimes ensues.

If the sickness involved is discovered to be maybe life-threatening, you have a Wham Episode instead.

Sometimes, the character might deny being sick or claim they are less sick than they are. If the disease is serious and they do that, the trope is Definitely Just a Cold.

If the illness is caused by contact with evil, that's Allergic to Evil. See also Soap Opera Disease for diseases which are ultimately fatal and may or may not be used as Filler and Victorian Novel Disease for when a Soap Opera Disease shows barely any symptoms. Compare Hurt/Comfort Fic. Contrast Plot Allergy which may cause symptoms but isn't really a sickness, Playing Sick (and its subtrope You Don't Want to Catch This) for when they're not really sick, just pretending, and Hypochondria (and Induced Hypochondria) for when they're not really sick, they just think they are. Compare Lice Episode, when a character (usually a child) has to stay home to avoid spreading head lice. Also compare Injured Limb Episode, where a character's arm or leg (or wing or flipper, depending on the species) gets injured and Glitch Episode, where an AI or cyborg goes wonky. May lead to, or be defied by, a Disease-Prevention Aesop.