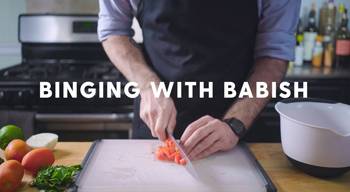 Serving up new episodes every week.
"Follow along with my torso every week as I recreate the iconic and obscure foods from your favorite movies and TV shows, all in dazzling 4K. We'll make some delicious dishes, have a little fun, and if you're not careful, you might just learn a thing or two."
— Andrew "OliverBabish" Rea
Advertisement:

(sometimes abbreviated to BWB) is a YouTube-based cooking show hosted by food enthusiast and hobbyist chef Andrew "OliverBabish" Rea. Each episode sees Andrew attempting to accurately replicate a food and/or recipe that appears in either a film or a TV show, using descriptions from the movie or show combined with his own culinary knowledge. If the food in question doesn't work, ends up being inedible, or could otherwise be improved upon, he then attempts to create a better version. Some episodes cover multiple dishes from one piece of media, or showcase variations of a food from different works, such as the "Cocktail Special"

The show also became affiliated with other major cooking channels, such as You Suck At Cooking and First We Feast

, and did several collaborations with other channels, like Cocktail Chemistry

and Bon Appétit magazine's It's Alive! with Brad [Leone].

In October 2017 he released a cookbook, Eat What You Watch: A Cookbook for Movie Lovers, containing recipes he's done on the show (and some he hasn't).

On October 12, 2017, Andrew launched a subseries, Basics with Babish, to help people who are just starting cooking.

On March 19, 2019, Andrew announced a series by the name of Being with Babish, featuring he and his friend/collaborator Sawyer visiting/helping fans (with It's Alive!'s Vincent "Vinny" Cross as cameraman). It launched on March 22nd.

On Sept 24, 2020, Andrew renamed the channel "Babish Culinary Universe" and unveiled the first show with a different host - Stump Sohla, starring Sohla El-Waylly (formerly of Bon Appetit). The name change is to better reflect the variety of shows the channel hosts alongside Binging With Babish. Stump Sohla only lasted a few months and a handful of episodes before she moved onto other projects, but in 2021 another BA Test Kitchen alum, Rick Martinez, launched Pruébalonote Spanish for "Try it!" a food travelogue series exploring regional Mexican cuisine, on the BCU. Also new in 2021 was the "Botched by Babish" series (in which Andrew seeks "redemption" for dishes he allegedly messed up in Binging or Basics, generally in a chaotic/farcical way) and The FundaKendalls (showing his kitchen assistant Kendall Beach's research into cooking fundamentals as part of writing Andrew's next cookbook). Lastly, Anime with Alvin, starring Alvin Zhou of Buzzfeed, who does food from various Animes in the same style as the Binging with Babish videos.

Also, for full, detailed versions of the recipes from each of the episodes, please see the the Binging With Babish website

Compare to How To Drink, which is like if Binging with Babish specialized in Mixed Drinks.

Binging With Babish has the following tropes:

For their 5 Million Subscriber Special, They go to New Orleans and make an effort to copy when Homer Simpson went there to eat the food.

For their 5 Million Subscriber Special, They go to New Orleans and make an effort to copy when Homer Simpson went there to eat the food.