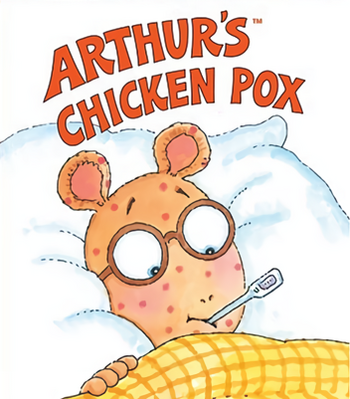 Shari Lewis: My love, I think you've got the chicken pox.
Lamb Chop: Let's give it back to the chickens!
— Lamb Chop's Play-Along, "Chicken Pox"
Advertisement:

This is a subtrope of the Sick Episode where characters suffer from chickenpox, breaking out in little red bumps and developing an uncontrollable itch. These bumps are usually depicted as tiny polka dots, often visually closer to the more serious disease of measles, but some works (particularly Gross Out Shows) will make the pox appear more blistery and realistic. Whether they exhibit any other symptoms, like a fever, fatigue, or headache, is up to the work. Either way, they'll have to get lots of rest, probably wearing gloves to avoid scratching themselves raw and slathering themselves in oh-so-soothing calamine lotion, and possibly having an oatmeal bath. Sometimes, a character may try to catch the disease so that they can take time off school.

As chickenpox is often regarded as a common "childhood" illness, these characters are almost always guaranteed to be young children. The disease has higher risks for adults, so a common angle for this plot is parents getting their young children to catch it early and develop an immunity to it, often by hosting a "chickenpox party" with an infected person. However, the popularization of the chickenpox vaccine has made the idea of a chickenpox party a Discredited Trope, except among people opposed to vaccination. The fact that the disease is no longer as common as it used to be (in the United States, a recent study estimated that symptomatic cases of the disease had reduced by over 90% thanks to vaccination) means that this trope is also found increasingly in older works, as a story about it isn't likely to seem relevant to modern-day children.note Those who were children in the '90s or earlier very likely have not-so-fond memories of dealing with chicken pox, but the millennial generation is likely to be the last to have them as vaccination has taken over.

Another common angle is wordplay on the name of the disease, with young characters assuming it has something to do with chickens. In some works, chickenpox may actually turn the character into a chicken, whether they develop the rash first or not. As for the real origin of the "chicken" in "chickenpox," there's no confirmed answer, just a few theories

note "Chicken" is associated with weakness, the Old English word giccan for "itch" may have been corrupted to "chicken," the blisters may resemble chickpeas, etc..

For fictional diseases that result in a character breaking out in spots, see Polka-Dot Disease. These two tropes can overlap if the fictional disease bears significant resemblance to chickenpox, especially if there's an uncontrollable itch to accompany the spots. Other elements that distinguish the disease as a chickenpox analogue are using the "[animal] pox" name template, the disease spreading mostly among children, and if the disease can only be caught once in a lifetime.

Milly gets chicken pox. On her birthday, no less.

Milly gets chicken pox. On her birthday, no less.