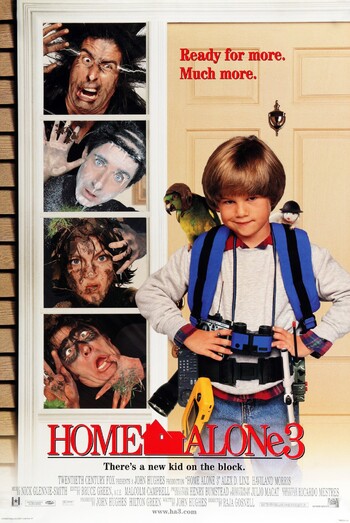 "What burglar goes into a house and doesn't take anything? You know what I think? They're looking for something special. And they're looking in every house because they don't know who has it. The question is... what is it? If nobody's gonna do anything about this... I'll just have to do it myself."
— Alex Pruitt
Advertisement:

Home Alone 3 is a 1997 American Christmas family comedy film. It's the third installment in the Home Alone series. It was written and produced by John Hughes, but Chris Columbus didn't return to direct — that role was given to Raja Gosnell, editor of the first two films (and future director of Big Momma's House, the live-action Scooby-Doo movies, and Beverly Hills Chihuahua).

The film has a completely different cast (i.e. Kevin was replaced by Alex Pruitt, played by Alex D. Linz), but was otherwise still similar to the first movie. In fact, many of the characters are very much like the characters of the previous movies, with one exception: the stupid burglars, wanted by the local police, were replaced with a ring of four intelligent spies wanted by the FBI, making the traps less believable.