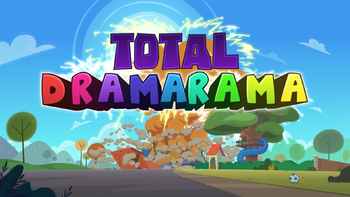 They're back again, now in Fun Size!
You thought the teens were trouble? Meet the toddlers...
— Tagline
Advertisement:

Total DramaRama (originally announced as Total Daycare Drama or Total Drama Daycare) is a Spin-Off Babies show to the Total Drama series, and is the second Spin-Off created in the overall franchise, after Total Drama Presents: The Ridonculous Race. The series is created by Fresh TV and premiered on Cartoon Network in the United States on September 1st, 2018note two episodes were released early on CN's digital platforms on July 30 and August 13, respectively and Teletoon in Canada on October 7th, 2018.

The show re-introduces eleven contestants from Total Drama Island and one character from 6teen and places them in an Alternate Continuity where they are aged down from sixteen-year-olds to four-year-olds and attend a daycare centre run by Chef Hatchet, who is now the kids' long-suffering teacher instead of a cook. Although the show switches out the spoofing of reality TV for all sorts of wacky adventures around the daycare, the characters retain all their teenage attitude inside of their tiny toddler bodies. Each episode features plenty of dream sequences, cutaways, visual jokes, confessionals, and flashbacks, as the kids concoct all manner of zany schemes and get into plenty of mayhem.

On December 22nd, 2018 it was announced that the series had been renewed for a second season which began airing on Cartoon Network in the US in January 2020. Then on June 24, 2020, it was confirmed that the series got renewed for a third season, which premiered on April 3rd, 2021 on Cartoon Network in the US and on June 6th, 2021 on Teletoon in Canada. From "Sugar & Spice & Lightning & Frights", the 8th episode, onwards, two new children join the main cast: Lightning from Total Drama: Revenge of The Island and Sugar from Total Drama Pahkitew Island.

On December 20, 2021, it was confirmed that with the original Total Drama's renewal for two more seasons on HBO Max, production on the series would be concluding in early 2022, finishing the series' run at 3 seasons of 78 episodes.