Western Animation / The Mighty B! 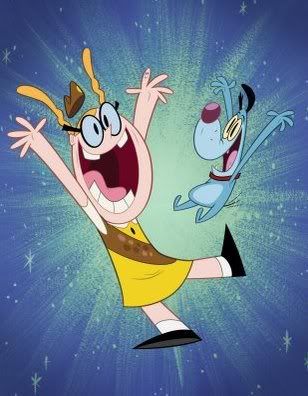 WOW! I got the beat, so all the kids dance with me, me, me, me! Pick it up, turn around, here comes the Mighty B! B! B! B!
Advertisement:

What happens when you combine the creative talents of Amy Poehler (of Saturday Night Live fame), Erik Wiese (SpongeBob SquarePants storyboarder), and Cynthia True (The Fairly OddParents writer)? The Mighty B!, a Nickelodeon animated series that manages to be completely insane and down-to-earth at the exact same time.

Bessie Higgenbottom (voiced by Poehler) is an abnormally eager Honeybee scout determined to collect every single Honeybee scout badge ever, believing that once she does this nigh-impossible task, she'll become a super hero (the titular "Mighty B"). Living with younger brother Ben, pet dog Happy, and mother Hilary in San Francisco, Bessie ends up going on a multitude of strange adventures. From covering the entire city in wool to getting trapped in Alcatraz, Bessie does everything either to get a badge or have some fun.

The show debuted in April, 2008. After a rough air schedule, The Mighty B! was pretty much forgotten halfway through 2010. It took a station change to Nicktoons Network and another year before the final episodes ever got released, eventually ending its run in June 2011.

Please do not confuse this with The Mighty Boosh.

The Mighty B! provides examples of: