Western Animation / The Mighty Ones 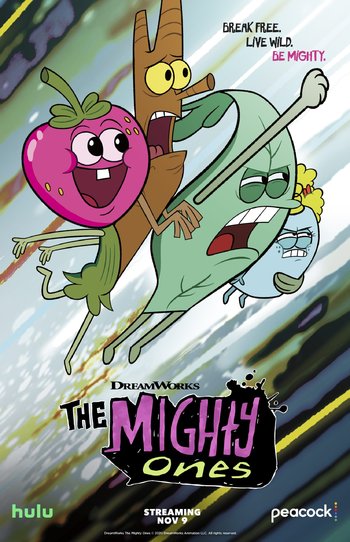 The Mighty Ones is a DreamWorks Animation television series, created by animation veterans ​Sunil Hall (Gravity Falls, The Penguins of Madagascar) and Lynne Naylor (The Ren & Stimpy Show, Samurai Jack, Batman: The Animated Series). It is the first Dreamworks production not to be based on any existing franchise, and premiered on Hulu and Peacock on November 9, 2020.

The series follows the hilarious adventures of four small-but-mighty best friends: Twig (Josh Brener), Rocksy (Jessica McKenna), Leaf (Jimmy Tatro), and Very Berry (Alex Cazares). They live in an unkempt yard owned by a trio of unruly humans, who the friends mistake for gods. Despite their diminutive sizes, the quartet attempt to live life to the extreme.

The Mighty Ones provides examples of: