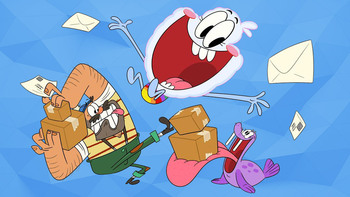 L - R: Angus, Parker, and Russell.
Once there was a captain, he was a serious dude
Well, he crashed into a mountain, but man, it lightened the mood
Speaking of lightening the mood, speaking of thunderous joy
In comes Parker J, a raincloud, looking for a new employ
The beardful captain said 'hey!', the cheerful raincloud said 'hi!'
They started working together, what a magical sight!
— Theme Song

Middlemost Post is a Nickelodeon animated series. Created by John Trabbic III (previously a storyboarder on SpongeBob SquarePants and Pig Goat Banana Cricket), it stars eager cloud-child Parker J. Cloud, who is determined to leave his stormy past as a raincloud behind and bring smiles to everyone's faces. Along with Parker's guardian-slash-workmate Angus Shackleton, a former sea captain, and their walrus companion Russell, the trio run the eponymous Middlemost Post, and are in charge of delivering mail around the town of Mount Middlemost. Zany antics ensue as our protagonists attempt to fulfill their given duties... or simply slack off and mess around.

The theme song explains some of the backstory of the show on how Parker Met Angus.

The theme song explains some of the backstory of the show on how Parker Met Angus.