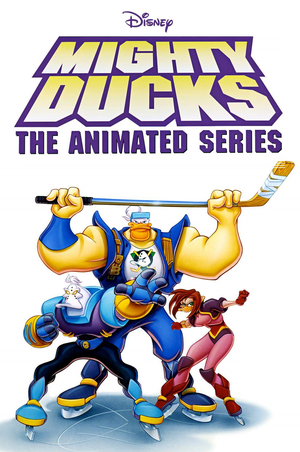 The Mighty Ducks animated series was, to put it gently, rather a surprise for viewers expecting a comedy series about misfit kids playing hockey. This animated series lasted from September, 1996 to January, 1997 on ABC (during their transition to Disney ownership — the season after this brought in One Saturday Morning), and also aired in First-Run Syndication (as part of the remnants of what was The Disney Afternoon).

It was instead about a team of anthropomorphic duck superheroes descended from alien dinosaurs who fight aliens with hockey-themed gadgets. Oh, and somewhere in space there were two dinosaur-derived races: the race descended from Ceratopsians, led by Lord Dragaunus, were evil and the Therapod (more specifically, duck) descended race was good. By an incredible coincidence, the Ducks' entire culture was based upon hockey.

When the Ducks pursue Lord Dragaunus to Earth (more specifically Anaheim, Southern California), the Ducks form an NHL team where they can hide in plain sight. Their arena, known only as "The Pond," has a hockey rink that doubles as a landing pad for the Aerowing above and has an HQ below. The Ducks and Dragaunus continue their fight, although there are other villains who sometimes challenge the Ducks.

Despite being ducks created by Disney, they are not part of the Disney Duck Canon. One would be intrigued to see Scrooge's reaction to these guys...note There were only a few vanishing references to this show in DuckTales (2017), apparently due to legal issues, mostly in the form of duck-billed goalie masks worn by characters for different reasons.