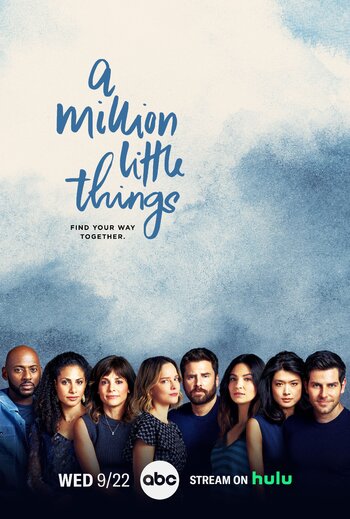 Find your way together.
Advertisement:

A Million Little Things is an ABC family drama series created by DJ Nash and starring David Giuntoli, Romany Malco, and James Roday Rodriguez as a tight-knit circle of friends coping with the unexpected suicide of the fourth member of their group, played by Ron Livingston. The friends realize that they need to finally start living life as they cope with their loss.

Set in Boston, the show features an ensemble cast including Allison Miller, Christina Moses, Grace Park, Stephanie Szostak, Tristan Byon and Lizzy Greene. The title is a reference to the saying, "Friendship isn't a big thing – it's a million little things".

The series made its debut in 2018 and was renewed for a fourth season, which premiered on September 22, 2021.