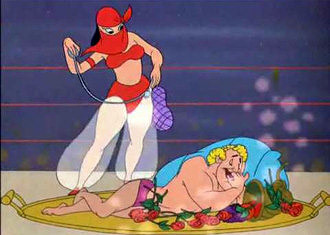 "Bunny Hugged" is a 1951 Looney Tunes cartoon short, directed by Chuck Jones, starring Bugs Bunny. In this one, Bugs is the pet of a rather delicate pro wrestler named Ravishing Ronald who is quickly (and quite literally) turned into a punching bag by his opponent, a terrifying muscleman called "The Crusher". Bugs, seeing that his "bread and butter" is imperiled, decides to go into the ring himself as "The Masked Terror". Naturally, The Crusher is hardly bothered by the wrestling skills of a small rabbit, so Bugs decides that he needs to reach into his bag of tricks to defeat him.