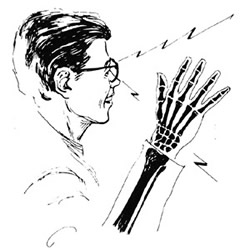 Neat, my bones! ...Are those tumors?
Pete: So you're telling me you never once looked in the girls' locker room?
Clark: Well, maybe once.
— Smallville
Advertisement:

A power that lets one see through almost anything. It can usually be turned on or off at will, and the objects that you can see through and how far you see through them vary.

How the power actually works, especially if it's implied to be actual X-rays, is confusing. Whether your eyes or your glasses are sensitive to X-rays, you would still need a powerful X-ray source on the other side of whatever you were trying to see through, and even then you'd only see things that were X-ray opaque. Presumably you'd "see" things thus revealed in a "colour" for which we normal, X-ray-blind people have no name.

X-ray scopes, goggles, visors and what-have-you are perennially popular items in video games. Sometimes this has unintentionally humorous effects, as when some characters repel-everything super armor turns out to be completely radiotransparent, allowing you to see his/her skeleton beneath.

In the real world, there is a technology called "X-ray backscatter imaging"

which allows for a certain amount of selective viewing. However, it requires bulky beamshaping equipment around an X-ray tube, which is of considerable size, not counting the high-voltage power supply and water-cooling system to keep from melting the tube's cathode. And then you have to scan the beam across the target, and use large and heavy detectors to pick up the extremely faint backscattered X-rays. The smallest mobile X-ray backscatter (not counting "portal"-style backscatter machines, which can cheat in a number of ways) machine is built into a 20-foot shipping container. It isn't impossible to miniaturize a backscatter machine, but it would take a whole lot of really surprising breakthroughs in a whole lot of scientific fields.

Also, all those X-rays would kill most people due to all the exposure to that much radiation. Given this, the common usage of X-ray vision for voyeuristic purposes has even worse implications than invasion of privacy—it's downright dangerous to the people who are being ogled.