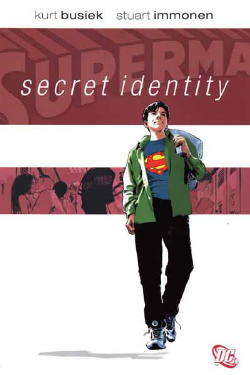 "Maybe I had a 'secret identity,' but then when you think about it, don't we all? A part of ourselves very few people ever get to see. The part we think of as 'me.' The part that deals with the big stuff. Makes the real choices. The part everything else is a reflection of."
— Clark Kent
Advertisement:

Superman: Secret Identity is a 2004 Elseworld story based on the idea behind Superboy-Prime from Crisis on Infinite Earths, but executed as a standalone non-canonical story without ties to the larger DC universe. It was written by Kurt Busiek with art by Stuart Immonen.

On an Earth much like our own, where superheroes don't exist but Superman comics do, David and Laura Kent decide to name their newborn boy Clark, as a homage to the fictional superhero. He is frequently bullied in school (and later in his life, at work) for his non-existent powers, and people try to jokingly hook him up with girls named Lois. One day on a weekend trip, however, the teenage Clark discovers that, seemingly out of nowhere, he has acquired real superpowers that seem to match Superman's in all aspects.

From that point onwards, he decides to secretly use his powers for public good, adopting a Superboy and later Superman costume. Later, as an adult, he starts collaborating with the US government agent Malloy and settles down with one of the former joke-hook-ups, Lois Chaudhari, whom he develops genuine feelings for.