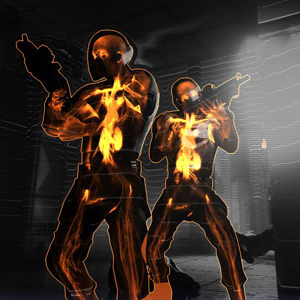 Predators develop senses that help them hunt. Sharp sight, delicate hearing, a keen nose... and Vein-O-Vision. Dracula and his ilk, as well as weirder fare, will have among their Super Senses the ability to see all the major and minor blood flows in a human body, often going to near X-Ray Vision levels by seeing their dinner's still beating heart!

This is something of a subconscious power, usually triggered by hunger. Vein-o-vision may be noticeable to onlookers if the character also manifests Animal Eyes or Glowing Eyes, but otherwise the power is inconspicuous. A Vampire Refugee or Friendly Neighborhood Vampire will probably have to use Heroic Resolve to resist sucking on so many delicious veins in plain view. As such, this can cause a Tomato in the Mirror or similar effect on a character once they realize their best friend is now on the dinner menu.

Also in a pinch, makes the stalking vampires' POV sequence all the creepier, showing us just how much of a Happy Meal the hero is to them.

This trope isn't restricted to the supernatural. As the page quote and picture show, it's also possible to make a technological equivalent of this trope for spies and soldiers. Typically it acts as a cross between X-Ray Vision and Infrared Xray Camera, allowing the agent using it to detect both the presence and Weak Points of enemies.

Meier Link has to resist the urge to feed on his beloved.

Meier Link has to resist the urge to feed on his beloved.