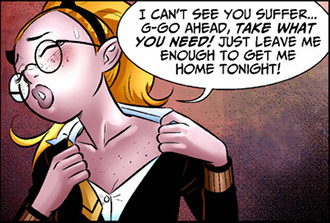 It sucks depending on blood or souls to survive. Having a talent in blood magic doesn't exactly mesh well with ethical behavior. But what do you do if your best friend or main ally has to have these things? Assuming their Horror Hunger or Blood Magic won't kill you instantly, just offer up a vein! After all, what are friends for?

This trope is for people who agree to sustain someone's Horror Hunger to keep them from taking advantage of the fact that Warm Bloodbags Are Everywhere. There can be multiple reasons why: maybe they are close friends trying to keep the feeder safe, maybe they are Vampire Vannabes excited to get close to one, or maybe it's an emergency and the donor would rather not have anyone else be attacked. If they're lucky, their friend won't be slowly killing them. If they're really lucky, they can work some form of symbiosis into the relationship.

In more idealistic media, this dynamic is likely to come with a level of mutual respect. The donor cares too much to kill the feeder outright and is compassionate enough to make this kind of sacrifice, while the receiver is generally a noble monster who tries to cause minimal harm and not take out their Horror Hunger on others. This could range from a one-time necessity to lifelong arrangement. A romantic and/or sexual relationship may be involved, which could lead to Hemo Erotic and/or Kiss of the Vampire. Compare to Zombie Advocate. In darker depictions, the respect is sorely lacking from one side - the willing donors are portrayed as somewhere between cult members and addicts and their vampiric overlords are quite happy to exploit them.

This trope is not exclusive to vampires, but for all creatures that have a form of Horror Hunger or a need to feed on human energies.