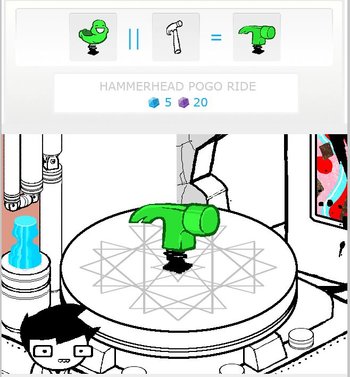 Basically it's a device that fuses multiple objects together, kind of like Fusion Dance. Works by either shooting a beam or placing the objects into a machine. May also work in reverse. Sometimes, the effect is unintentional and probably not the main purpose of the device; Teleporter Accidents are particularly prone to turning the devices into Merging Machines, especially in cases such as Tele-Frag.

May be involved in Item Crafting. This may be the source of Mix-and-Match Critters, Mix-and-Match Man and (sometimes) Ninja Pirate Zombie Robot.

Not to be confused with Combining Mecha.