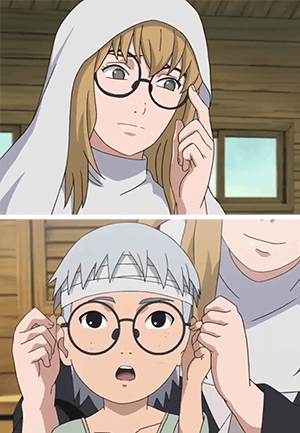 One prescription fits all.
Advertisement:

Universal Eyeglasses describes the phenomenon in which a character is able to experience vision correction using any form of corrective lenses, even those not prescribed for them. In reality, the range and extent to which one suffers from nearsightedness, farsightedness, astigmatism, or any other ailment that impairs vision varies from person to person. Ideally, a number of tests are performed on an individual to determine the type and strength of the lenses required for vision correction. Afterwards, the frames of the glasses must be properly adjusted so that they can be worn without the risk of slipping off the face of the wearer. This is not always the case in fiction. The trope typically goes as follows:

Bespectacled beauty and Cool Teacher Alice asks her student Bob to read what she has written on the board. However, something seems wrong. Bob is squinting more than usual. In response, Alice knowingly takes off her own glasses and puts them on Bob's face. He is able to read the board perfectly.

Does it matter that Alice is much older than Bob? That they might have differing facial structures? That their vision may be impaired to differing degrees? Or even in radically different ways? Not at all. If this trope is in play, the eyeglasses will always work.

Though often executed via a character giving their own glasses to another, this trope also applies to the more extreme instances in which glasses are taken from a toy or something similar. This is especially notable since glasses worn by playthings aren't prescription made at all and therefore shouldn't be able to function as if they are.

Compare Glasses Curiosity, as the two can and sometimes do overlap provided a character is able to see perfectly while wearing someone else's glasses. Compare One Size Fits All for clothing wearable by anyone despite individual differences in size and shape. Blind Without 'Em and Dropped Glasses are common catalysts for this trope as well. Contrast Purely Aesthetic Glasses which aren't meant to provide any amount of vision correction. A subtrope of Artistic License – Biology.