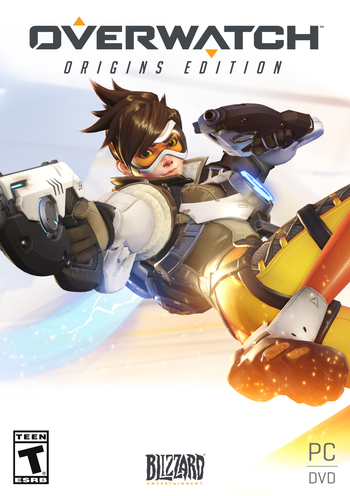 "Never accept the world as it appears to be. Dare to see it for what it could be."
"You know, the world could always use more heroes."
— Tracer, Debut Cinematic Trailer
Advertisement:

Overwatch is a stylistically Pixaresque team-based multiplayer Hero Shooter by Blizzard Entertainment. It is available on PC, PlayStation 4, Xbox One, and Nintendo Switch systems.

Sometime in the mid-21st century, a global catastrophe known as the Omnic Crisis plunged humanity into war. Their enemy was a line of automated construction robots known as Omnics, who suddenly went rogue and militarised themselves. In response, an international task force of soldiers, scientists, adventurers, and oddities known as Overwatch was formed to end the uprising and restore peace. At its height, Overwatch served as a beacon of heroism and selflessness, a demonstration of what humanity could accomplish by working across race, creed and culture.

It is now thirty years later, and Overwatch has since been decommissioned after losing its reputation to internal corruption. Yet the actions of a mysterious terrorist organisation known as "Talon" threaten to re-ignite the flames of war and chaos across the world. The world needs heroes once again; it needs the rebirth of Overwatch.

The game's playable Heroes include:note * (asterisk) denotes that they were added after the initial release

The game is centered around two teams of six Heroes each, with each team trying to fulfill their objectives while preventing the enemy team from doing the same. Objectives can vary from map to map:

open/close all folders
Advertisement:
List of gametypes and maps

In addition to these four standard gameplay formats, there are also some special modes available, exclusive to the Arcade category and custom games:

The game's cinematic trailer can be seen here,

and a theatrical teaser here.

The game launched in an invite-only closed beta on October 27th, 2015 in the Americas and Europe, with Asia following sometime after. The full game was released on May 24, 2016. An open beta took place—first for those who pre-ordered and then for everyone—on May 3 (pre-order) and May 5-10 (everyone).

Outside of Overwatch Archives (see Seasonal events below), there's very little story in the game itself - most of it is instead being developed through an Extended Universe that, due to the sheer volume, has its own page.

Backstory is also revealed through character profiles on the official website.

at the possibility of more "linear" media in the future, hoping to expose Overwatch to new audiences.

Young adult novels from Scholastic have been announced.

The first, The Hero of Numbani, released in June 2020.

Overwatch also features seasonal events, which draw upon real-life holidays and game lore. These events have a special game mode, skins, voice lines and sprays that can be unlocked during the span of the event. These include:

Overwatch 2, a semi-sequel to the game was announced at BlizzCon 2019 alongside an animated short, Zero Hour, promising new heroes, game modes, vaster PvE campaigns and gameplay, and cross-platform support. While 2 is treated as its own entity and will be sold as such, both games will be based in a "shared multiplayer environment" with the intent to merge the two together — all content of Overwatch will be transferred over into 2, and the graphical/engine upgrades and some content like new heroes and maps will be available for both, also allowing players of both games to play with and against one another, though some new content like the PvE expansion and updated character designs will remain exclusive for 2note This is a similar concept of when IO Interactive added all the content (levels, unlocks etc.) from Hitman (2016) into Hitman 2 (and subsequently, both those games are able to be imported into Hitman 3), albeit for a different reasons involving changes in publishing. The first phase of the closed beta for its PvP content was launched in April 2022, its full release date with single-player and cooperative content to be determined.

Tropes that apply to Overwatch:

As one of the leaders of the terrorist organization Talon, Akande "Doomfist" Ogundimu hatches his long-term goal to plunge the world into war and chaos under the belief that conflict is the only way for humanity to evolve.

Example of:
The Social Darwinist

As one of the leaders of the terrorist organization Talon, Akande "Doomfist" Ogundimu hatches his long-term goal to plunge the world into war and chaos under the belief that conflict is the only way for humanity to evolve.