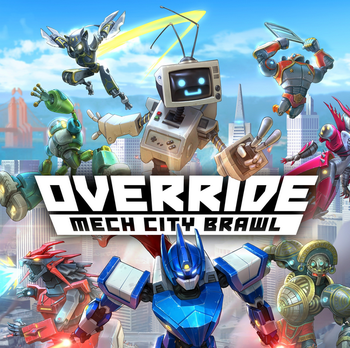 Override: Mech City Brawl is a 2018 Fighting Mecha Game developed by Balance Inc and published by Modus Games. It was released on December 3rd, 2018 for PC, and on December 4th, 2018 for Playstation 4, and Xbox One.
Advertisement:

The game is set in a world where various colorful, unique Humongous Mecha do battle in the Mech Battle League as public sporting events. Arcade Mode sees Kaiju called Xenotypes emerge and begin destroying cities, with only the pilots of these mech standing in their way. However, the situation may be far more complicated than it seems...

The game is primarily multiplayer with an arcade and vs CPU battle mode.

Followed by a sequel in 2020 Override 2 Super Mech League.

On September 29, 2022, it was announced that online servers for the first game will soon be closed down. As of December 2022 it has also been delisted from online storefronts.