Video Game / Out There Somewhere 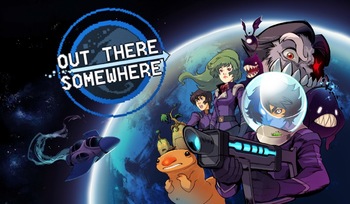 Out There Somewhere is a 2012 Puzzle Platformer for PC by MiniBoss studios, updated in 2014 for a Steam release. It presents the adventures of space fighter Yuri against the evil conqueror Grigori.

After a brief fight, the hero crash lands on a mysterious planet in which he must search for resources to fix his spaceship. Gameplay centers around a Teleport Gun that warps Yuri once its beams hit a surface, allowing him to interact with some mechanisms and reach otherwise inaccessible places.

Not to be confused with Out There, a much more somber space exploration game ported to Steam from the mobile devices.

Tropes featured out there somewhere: