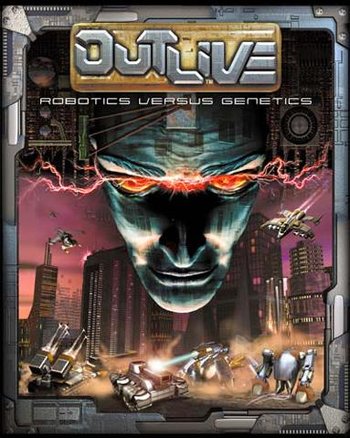 Outlive is a Real-Time Strategy game developed and published by Continuum Entertainment. It was released in Brazil in 2000 and in the rest of the world in 2001, published by Take-Two Interactive.

Increase in terrorist activities and dwindling natural resources have lead to the world's superpowers to unite, forming the World Council. Seeking to solve the above issues, the World Council commissioned expeditions to scout out every planet and moon in the Solar System in hopes of finding resource-rich ground. After a lengthy search, they concluded that Titan, one of Saturn's moons, is their best bet. Thus begins the Outlive Project where three specially made starships will bring colonists to Titan and begin mining operations. There was a problem though; Titan's environment was unsuitable for humans. Fortunately, two groups had solutions to this problem. One of them is led by Dr. Joseph Taylor, who intends to create genetically modified beings that would adapt to Titan's environment and do the initial work. The other is led by Dr. Mary-Anne Harley of Mechatronics Inc. who preferred robotics and advanced Artificial Intelligence to do the job. Both were given one year to churn out prototypes of their respective entries. This all seemed like a simple rivalry at first, until the Liberty Army's constant involvements through their various terrorist attacks would only reveal that there is more to the World Council and Mechatronics Inc. than meets the eye...