Video Game / Out There 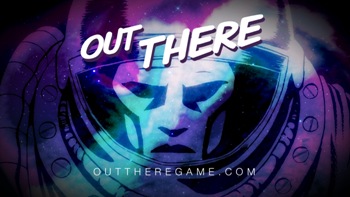 Out There is a self-styled "dark and melancholic adventure in deep space", initially released in 2014 for Android and iOS by mi-clos studio. An Updated Re-release with extra content (including a fourth ending), titled Out There: Omega Edition was released on PC via Steam on April 2nd 2015, with the expanded content being simultaneously added to the mobile versions as well.

You play the pilot and sole crewmember of a small transport spaceship supplies to mining stations on one of Jupiter's moons back to earth. During one trip, the ship malfunctions. Instead of arriving near Jupiter, you wake up from your cryogenic stasis centuries later, very, very, very far from home in another star system. An alien intelligence contacts you, giving you the Space Folder, a technology that allows Faster-Than-Light Travel between stars. It asks you to meet them in a space station in another system way across the galaxy. There's nothing for it but to use your new gift to pilot your ship from star system to star system until you reach them.

The game contains no fighting element. You just explore space systems, contact alien races, discover new technologies, and do your best to survive the dangers of space and keep the levels of fuel, oxygen and hull above zero. As with other Roguelikes, Permadeath and your survival is a Luck-Based Mission subject to the whims of the Random Number God.

A second Updated Re-release featuring even more content, a new escort mechanic and yet another ending was released for the Nintendo Switch on Apr 9, 2019. The content from this version, titled Out There: Omega The Alliance has yet to show up on other versions of the game, but has been promised by the developers to do so eventually.

A Interactive Graphic novel based on the game named Out There Chronicles has also been made by the developers, the first chapter available for free on booth IOS and Android.

Not to be confused with Out There Somewhere, a light-hearted Puzzle Platformer from 2012.

Out There contains examples of: