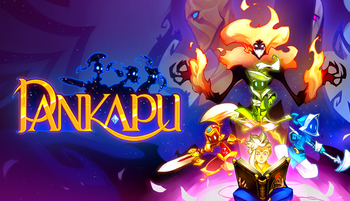 Pankapu is a 2D Action Platform Game by Too Kind Studio.

One night, a boy named Djaha'rell is woken up in the night by a nightmare. His father comes in to see what's wrong, and decides to help Djaha'rell by telling him a story.

The story is about the land of Omnia, a Dream Land where all the people live in harmony and create hope. That all changes, however, when one day, beings of darkness known as the Hya'Nagi cross into Omnia through the veil separating it from the nightmare world. They began to invade, shrouding Omnia in darkness and threatening to extinguish all hope within forever.

Then, Iketomi, the hymn of dreams, decided to act. Using all the dream matter left in Omnia, he created a Guardian capable of defeating the invading Hya'Nagi. He names this hero...

The game was funded on Kickstarter on December 7th, 2015. It was released on Steam for PC on September 21st, 2016. It's also available on the Nintendo Switch, Playstation 4, and Xbox One.