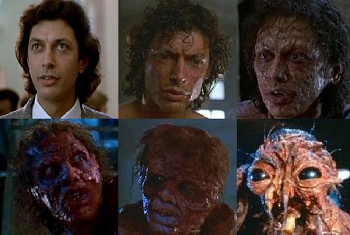 Something's starting to happen to one of our characters - Maybe he's been infected with some virus... maybe some witch had gave him a curse... maybe he's going crazy... or maybe he's just gaining weight. Whatever it is, it's usually not directly explained, and we don't see him changing on-screen...

And each time we see him after that, the change is a little more noticeable, usually until it reaches either hilarious or horrific levels.

As mentioned above, this is nearly always either Played for Laughs, or Played for Drama as Transformation Horror.

A Super-Trope to Virus Victim Symptoms and a Sister Trope of Transformation at the Speed of Plot. May happen with Evil Makeover and Madness Makeover. What Monster Delay is to a Big Bad, this is to a protagonist/major character — either way, the audience doesn't see the creature in all their "glory" until the endgame. Contrast Oblivious Transformation, where a character isn't even aware of the charges to their body.

May also overlap with Metamorphosis, which is often a gradual process.

And Then John Was a Zombie is sometimes the end result.

See Fisher Kingdom (more specifically the second variant) for when simply being in a certain place can have this effect.