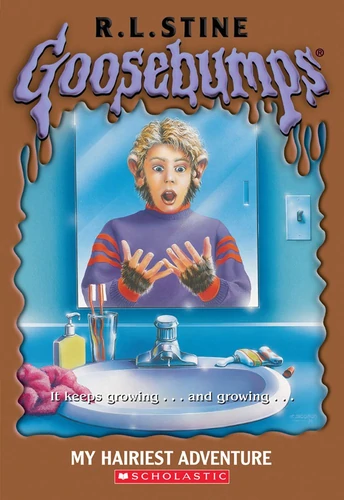 Stop sniggering! There's nothing funny about a 12-year-old boy with hairy palms in the bathroom!
Advertisement:

The Goosebumps book where some kid starts growing hair in places where hair should not be. Not in the way you may expect.

When Larry finds a discarded bottle of fake tan, he and his friends are sure it will help them win their school's upcoming Battle of the Bands. But things soon start to go bad. Larry's growing thick, dark hair all over his body. Even in places people don't normally grow hair. The same thing is happening to some of his friends. They don't appear to be werewolves... but just what is going on?

This book was adapted into episode 13 of the first season of the TV series, with a novelization based on the episode being released as book 6 of the Goosebumps Presents series.