Series / Round the Twist 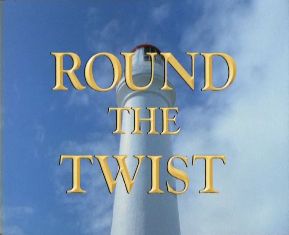 Have you ever
Ever felt like this?
Have strange things happened?
Are you going round the twist?

Round the Twist was an Australian TV show that every Aussie and Brit who grew up in The '90s likely remembers watching. The show was about the Twist family — 14-year-old twins Pete and Linda, little brother Bronson and widowed father Tony, a.k.a. "Dad" — who live inside a lighthouse that seems to be a beacon for the supernatural. Ghosts, weird creatures and mysterious magical objects abound—from magic gumleaves to haunted toilets to super-power-inducing underwear, the show revelled in the weird, the revolting, the hilarious, and the downright disturbing (which did get it in trouble with the Australian censors at the time, who felt that the rude, sexually suggestive humor and scenes of horror were too much for viewers).

Four series of 13 episodes each were made altogether, produced in 1989, 1992, 1999 and 2000, originally for the Seven Network but later picked up by The ABC. The first two series were based on the short stories of children's author Paul Jennings, who also wrote the scripts. Due to "creative differences" Jennings left the show after that, taking the rights to his stories with him. When the show was revived seven years later by the ACTF (presumably to up the number of episodes to 52, i.e. one for every week of the year), it consisted of original stories written by a new team of writers. During the 7 years the show was off-air, The Genie from Down Under (a similar but far less popular show also made by the ACTF, but with an explanation for the unusual events that occurred) took its place. Around the same time, the even-lesser-known series Driven Crazy, also based on Jennings' stories, aired on Network Ten.

The show was also run in Britain on CBBC and in America on Fox Kids (around the time that FK was airing horror comedies, like Goosebumps, Eerie, Indiana, and Toonsylvania. Fox Kids in America even advertised Round The Twist as an Australian version of Goosebumpsnote though it's more like Eerie, Indiana in that there's a running storyline rather than being strictly episodic), and hence the series has some recognition in both places.