Series / The Genie from Down Under 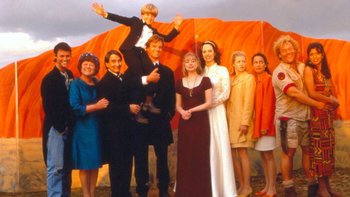 The Genie from Down Under follows Penelope Towns (Alexandra Milman), a former rich English snob whose mother Diana (Anna Galvin) has run out of money after the death of her father. It was created in the 8 year period between seasons 2 and 3 of Round the Twist by the same production crew (the ACTF).

While searching through her attic, Penelope finds an opal, and upon rubbing it, out pops an Australian man and his son who claim to be genies, and that they will grant Penelope's wishes in exchange for their freedom. Penelope names the pair Bruce (Rhys Muldoon, replaced in the second season by Sandy Winton) and Baz (Glenn Meldrum), and decides she'd rather keep the genies in her service than set them free. However, when she wishes for 20 million pounds, she is transported to a rundown ranch in the Australian Outback, where she's informed she has inherited 500 acres of land worth 20 million.

Penelope In The Pillory Scene

Otto takes advantage of the genie's abilities and uses against Penelope.

The Genie From Down Under

Penelope In The Pillory Scene

Otto takes advantage of the genie's abilities and uses against Penelope.

The Genie From Down Under