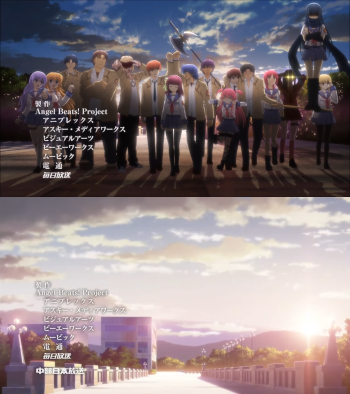 Top: The standard credits.
Bottom: The finale credits.
It's time to say goodbye. You've just delivered your loyal audience a Grand Finale (or a Season Finale) that stunned them into silence, tugged on their heartstrings, made them shout for joy, and hopefully wrapped everything up in a befitting and satisfying package. However, there's one last thing to do: the credits sequence. Sure, you could use the same standard credits you've used in every other episode. But it's the finale, so why shouldn't the credits be as special as the rest of it?
Advertisement:

As the name suggests, Finale Credits is when the final installment of a work has different Closing Credits than what you'd normally see from that series. Some examples include using a Solemn Ending Theme or extended version of the Theme Tune, a montage of the series' most iconic moments, and the credits playing over the final scene.

See also Special Edition Title, where this is done with opening titles.

Since this is a Credits Trope, there will be spoilers in some of the examples below.

Launchpad accidentally opens the planes cargo door while air-born, and the whole falls with the credits and the instrumental theme of the show.

Launchpad accidentally opens the planes cargo door while air-born, and the whole falls with the credits and the instrumental theme of the show.