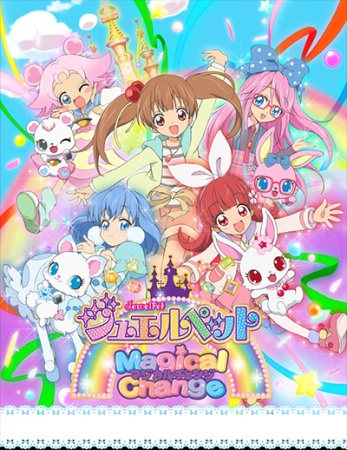 Jewelpet: Magical Change is the seventh (and final) season of the Jewelpet anime.

Seven years ago, a castle descended from Jewel Land to land in the human world. Though visible to all, it is impossible to enter it, as it is intangible. People eventually got used to it and stopped trying to investigate it.

Around the same time as the castle drop, 7-year-old Airi Kirara comes across the Jewelpet Ruby one night before going to bed. She asks Ruby to use her magic on her to put her to sleep, to which Ruby acquiesces. And then she disappears.

In the present day, 14-year-old Airi, with only vague memories of what happened that night and a mysterious pendant, lives in a detective agency with her science-crazed older brother Sakutaro. The Jewelpets Larimar, Luna and Labra appear and ask her to look for their friend Ruby, who disappeared in the human world seven years ago. Airi and co. find her sleeping in a toy store. After a happy reunion, Ruby manages to shake off a couple of guards by using Airi's pendant to turn into a human, amplifying her magic.

The plot of this season mainly deals with the Jewelpets trying to adapt to the human world, where they were sent to in order to understand humans better and make them believe in magic again. Interfering in their plans are Ruby's rival Luea and her human partner Laura Fukuooji, who want Airi's pendant (and her big brother) for themselves.

It's the first not to have any involvement by Studio Comet. Instead, the series is a co-production between TMS Entertainment and Studio DEEN, the latter being the animation producer.

Luea transforms into a human

Luea transforms into a human