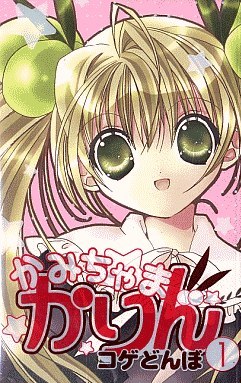 "No girl with an iota of sanity would transform into a god on her first date!"
Advertisement:

Klutzy, underachieving sixth-grader Karin is miserable. Not only are her parents dead, but her beloved cat, Shii-chan, just died, and on top of all of that, she gets terrible grades in school. Little does she know that, thanks to a ring that was left to her by her late mother, Karin is about to transform into a goddess, and her life will never be the same. Teaming up with Kazune Kujo, she vows to protect Kazune's cousin Himeka from Kirio Karasuma, who is after her for unknown reasons. Karin also gets a crush on Kirio's twin brother Kirika Karasuma, but could he be involved with his brother's plans? And why does the New Transfer Student Michiru "Micchi" Nishikiori have a god transformation ring of his own?

Created by Koge-Donbo, Kamichama Karin was serialized in the shoujo magazine Nakayoshi from 2003 to 2005; it was supposed to be a one-shot Affectionate Parody of magical girl series, but its unexpected success caused it to be continued for seven volumes. It was later adapted to a 26-episode anime series in 2007. The manga also has a sequel, Kamichama Karin Chu, where Karin and Kazune's Kid from the Future comes back to Set Right What Once Went Wrong, and introducing new character Jin Kuga and giving the main cast new transformations.

Not to be confused with the vampire series Karin, or with Kamichu!, the other series about a girl who becomes a god.