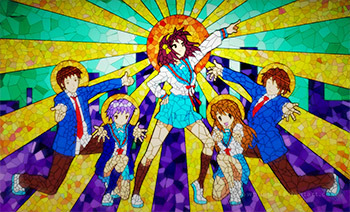 And the goddess said, let there be a Dancing Theme.
Advertisement:

Since most people imagine God as a bearded old man, the natural antithesis of this expectation would be having the supreme ruler of the universe be a young girl instead. Creators will sometimes do this to subvert a viewer's expectations, especially in works heavy with Epileptic Trees and Mind Screw.