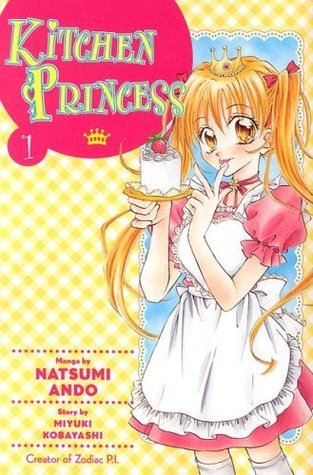 A romance with a tasty twist.
After an accident leaves her orphaned, Najika Kazami is left to her own grief and unanswerable questions. After wandering too far from Lavender House, she trips and falls into a pond. She's rescued from almost drowning by a kind-hearted young boy about her age. Giving her words of encouragement and compassion, he hands over a spoon and a cup of flan. When he disappears thereafter, that flan and spoon are the only clues as to his identity. It isn't until a few years later that Najika learns that the spoon's insignia is Seika Academy's, a prestigious school for students that show incredible talents. Armed with only her amazing taste buds and cooking skills, Najika enters Seika Academy in the hopes of finding her Flan Prince.
Advertisement:

Kitchen Princess (キッチンのお姫さま, Kicchin no Ohime-sama) is a cooking shōjo manga by Miyuki Kobayashi with art by Natsumi Andō (Arisa). It ran from September 2004 to October 2008 in Nakayoshi and was compiled into ten volumes. Del Rey Manga originally released the series in English. After they disbanded, Kondansha took over their catalogue and re-released the series in 2013 as a four omnibus set.

A light novel called Kitchen Princess: Search for the Angel Cake (キッチンのお姫さま 天使のケーキを探せ！, Kitchin no Ohime-sama Tenshi no Kēki o Sagase) was published in March 2008. Najika is tasked with replicating a white cake recipe for the grandmother of one her classmates. Del Rey translated this as well, releasing it in November 2009.