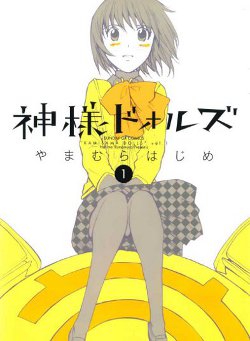 Kamisama Dolls is a seinen manga series by Hajime Yamamura, which was serialized in Monthly Sunday Gene-X from 2006 to 2013. An Animated Adaptation has aired in Summer 2011.
Advertisement:

Not so Ordinary College Student Kyouhei moved away from his small village to study philosophy at Tokyo University, hoping to escape the life of a Seki before it was thrust upon him. Unfortunately, Kyouhei finds himself witnessing a string of bloody murders involving members of his estranged clan. Another Seki by the name of Aki escaped his prison in the village and is slaughtering them with the use of a mystical doll known as a "Kakashi." And the only one with the power to stop him is Kyouhei's little sister Utao, who has a Kakashi that Kyouhei was supposed to receive, but little in the way of experience to fight with it.

Kyouhei finds himself conflicted between wanting to stop Aki before he kills anyone else, and staying away from the affairs of the Seki he left behind.