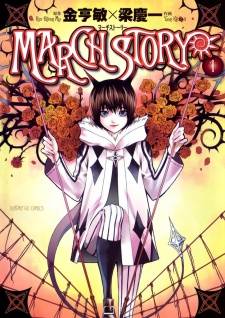 This is March. Guess which pronoun you're supposed to use.
"You must never heed the sweet whisperings of the Ill... and never touch something if you don't know what it is! For the Ill know what your heart desires!"
— March
Advertisement:

In 18th century Europe the demons known as Ill can be found in some of the most unlikely of places. Born of the torment of the creators of the objects they inhabit, they seek a new human body to inhabit. Thus why you must never touch something, if you don't know where it's been.

March is a hunter of these monsters known as Ill, a member of the Ciste Vihad, but March has another burden on top of the usual risks. March is already possessed, and in order to keep the demon within from emerging March may never fall in love with anyone. With this fact in mind, March must now travel the countryside, saving what people she can from the Ill, collecting the objects they were born from to send to Rodin, the humble owner of an antique shop.

March is sent on her missions by the fortuneteller, Jake, who demands that she be treated like a princess. She is later joined by another hunter, Belma, whose methods are not to March's liking.

March Story is a manga written by Kim Hyung-min and illustrated by Yang Kyung-il, who would both go on to create Defense Devil. The manga ran in Monthly Sunday Gene-X from 2007 to 2013, and it's available in English from Viz Media under their Viz Sig label.