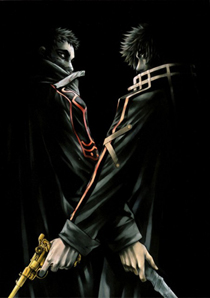 "A long, long time ago in the east, there was a country called Jushin. In Jushin there lived secret agents known as Angyo Onshi. Angyo Onshi were special envoy designated by the king. They disguised themselves and roamed the country correcting corrupt governments and brought people to justice. However, Jushin has been destroyed, but there is still one Angyo Onshi wandering..."
— Opening lines
Advertisement:

Shin Angyo Onshi (or Tale of the Phantom Blade Master) is the story of Munsu, one of the few surviving men of the fallen empire Jushin. He also happens to have been one of Jushin's Angyo Onshi, operatives who wandered the countryside in disguise, righting wrongs and triumphing over evil with the power of his magical medallion and an army of phantom soldiers. Despite the destruction of Jushin (by his own hand, so the stories go) Munsu carries out his duty out of a sense of loyalty to the king that he supposedly killed and a burning desire for revenge against the man who masterminded everything - Aji Tae.

The comic was serialized from 2001 to 2007 in both South Korea and Japan (running in Young Champ in South Korea and Monthly Sunday Gene-X in Japan), and was adapted into an animated theatrical-release film in 2004 in a first-of-its-kind collaboration between Japan and South Korea. In 2007, an English-language version of the film was released in the United States by ADV Films under the Market-Based Title Blade of the Phantom Master. In 2008, the anime became one of over 30 ADV titles transferred to Funimation. As of 2017, the manhwa is being re-released serially on Naver as a fully-colored Webtoon (but only in Korean for the time being).

Well known for its almost gratuitous level of World of Badass. Has a character sheet.