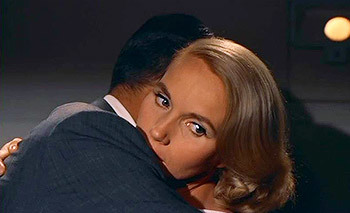 "Never trust a hug. It's just a way to hide your face."
— The Doctor, Doctor Who, "Death in Heaven"
Advertisement:

Two characters give each other a hug. Everything looks nice and friendly (or loving), but then Alice drops the act and allows her real feelings to show through in their expression, behind Bob's back where he can't see. But the audience can see, and so this allows them to be clued in on two things:

The face Alice makes is important in determining just what the secret might mean since the audience can't tell from context or anything.

And once the hug is complete, Alice schools her face back to normality so Bob continues not suspecting a thing; she's taken what may be her only chance to let her real feelings out.