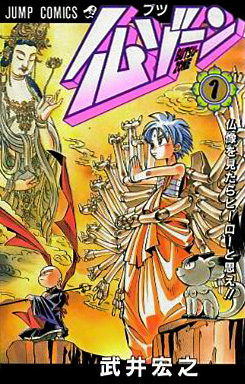 Butsu Zone the first serialized manga by Hiroyuki Takei, author of the more famous Shaman King. It was serialized in Weekly Shonen Jump for 19 chapters from March 3 to August 14, 1997, and compiled into two volumes.
Advertisement:

Some time in the present, a young orphan named Sachi is in the midst of being chased off the Buddhist temple in which she and her grandfather live to make way for the Mignola Clan's four-star hotel redevelopment project. One of the gangsters notices the temple's patron god — the Bodhisattva Kannon — who was reputed to bear one thousands arms, each dedicated to helping and protecting humanity. When told as such, another gangster insults the god and threatens violence against Sachi, and is surprised by the statue coming alive and punching him in the face. The statue shatters, revealing within a teenage boy in ascetic robes, who berates them for raising their hands in such a dishonorable way. The boy introduces himself as Sennju, who comes from the land of the Buddhas.

And so begins a journey through Japan touched by the Buddhist faith, meeting gods, fighting demons who possess the statues of Bodhisattvas, and redemption.