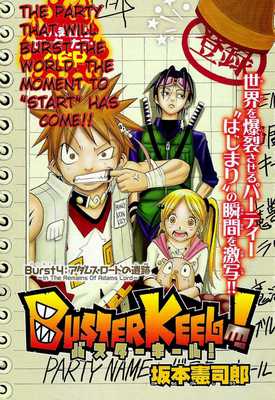 Buster Keel! is a shonen manga by Kenshirou Sakamoto that ran in Monthly Shonen Rival from 2008 to 2012.

In a very strange fantasy world, there are those that set out be Adventurers or more over Monster Users: Humans who can control said beasts with certain instruments (usually a guitar) and increase their power. However not all monsters in this world are visible to the human eye, some move around in human form either voluntarily to keep their powers in check or are forced into it to keep certain ones from going wild. The latter is the case of Keel, a Dragon Ape (yes you read right) who's stuck in human form and searching for a individual name Shiva who put him in such a predicament (the reason why is unknown however). As the story opens he meets Lavie, a female monster user and her flying pig monster, Mippy. After certain events, the two decide to work together to find Shiva (both with their own reasons for doing so) along the way they meet Blue, a Magic Warrior who's on his own quest and soon all three of their goals collide and the foursome form a party together. Say the least, Shōnen adventure ensures.

Don't be surprised if you find it similar to certain other manga, though please enjoy it as its own thing.