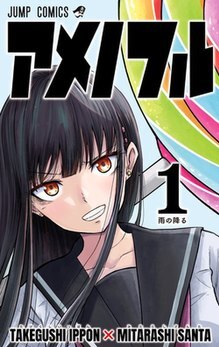 Cyndy ToyToy one day sold 100 pieces of limited candy with different flavors with none having the same flavor. They turned out to give those who consumed one the power to create confections out of thin air who are called "Sweets Users" who none have the same confection. One of those sweets user was a lollipop user who used their power to decimate Tokyo.

It has been five years, ToyToy Candy has since been restricted yet there has been a rise of crime perpetrated by Sweets Users. The "Sweets Police" (Recette) was formed in response to stop them, especially to apprehend the infamous lollipop user.

Tsumugi Minase is a lollipop Sweets User who, on that day Tokyo was decimated, was a witness who saw the culprit lollipop user despite there shouldn't be duplicate powers. Ever since then, she tries to hide her powers and live a normal life least she be falsely accused and arrested. This is the tale how it all unwraps and she gets into the assortment of the conflict.